Can You Mix Formula And Breastmilk? 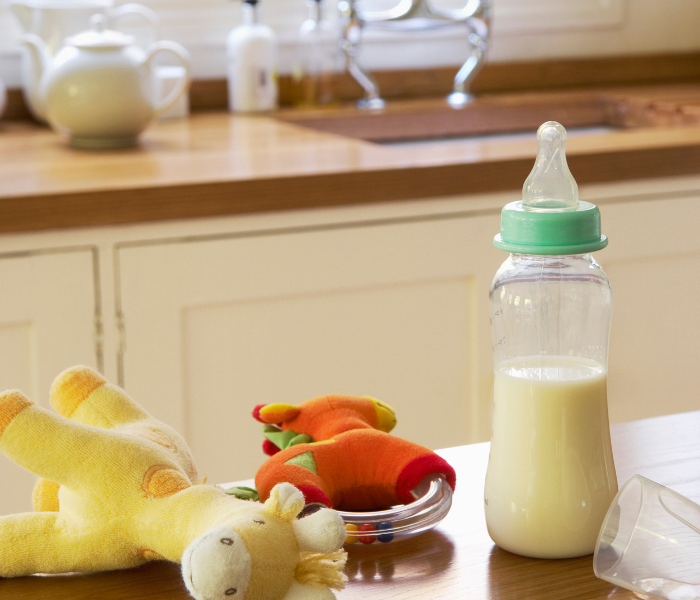 Plus, I will discuss the reasons why you should or should not do it.

Pumping And Supplementing With Formula

When my twins were born and in the NICU, I was an exclusively pumping mama. It was made very clear to me, by the nurses, that I should feed bottles of breastmilk first, then supplement with formula as needed.

This was fine, but it did make the feeding process more complicated.

Since I had twins, I was not pumping enough milk for my babies to exclusively receive breastmilk. So, they received formula as a supplement.

This meant mid-feed when the breastmilk bottle was empty, a bottle of formula would be made up.

We used the same bottle for breastmilk and formula because having four bottles to clean after every feed was just too much to deal with.

This was the bottle feeding system we implemented because I thought it was a big no-no to mix formula and breastmilk.

I was worried the formula would ruin the breastmilk, if mixed together, or vice versa.

Can You Mix Formula And Breastmilk In The Same Bottle?

After a few weeks of going through this bottle feeding routine, it got old.

I did a little research and I came to find that YES…you can safely mix formula and breastmilk in the same bottle.

Reasons To Not Mix Formula And Breastmilk

But, why do nurses tell you differently? Well, breastmilk is liquid gold, right?

If you are concerned with wasting breastmilk or your baby doesn’t always drink her entire bottle, then you might want to consider keeping breastmilk and formula separate.

Why You Would Mix Formula And Breastmilk

On the other hand, as described, it can be really inefficient to have to separate breastmilk and formula.

Are you a pumping mom who is supplementing with formula? Or, maybe you are pumping at work and using formula too.

Then you might want to consider mixing formula and breastmilk in the same bottle.

My recommendation is to keep breastmilk and formula in separate bottles during the first 2-3 weeks at home with your newborn.

If you realize your baby is (mostly) drinking all of his bottle at each feed, then it’s probably safe to start mixing breastmilk and formula in the same bottle.

You can always switch to separating breastmilk and formula bottles, if you feel like your breastmilk is going to waste.

So, to summarize, can you mix formula and breastmilk? Yes, it is absolutely safe!

However, there are very good reasons why you might want to feed breastmilk and formula from separate bottles.

I also want to mention one last thing about formula. If you are looking for formula that is the closest possible to breast milk, then you will want to check out these organic European formulas as an option.

Are You Struggling With Breast Milk Supply?

Before I sign off, I thought it’s possible that some moms find themselves on this post because they are not producing as much breast milk from pumping as they would like.

If that’s the case, then I highly recommend you check out the Pump It Up pumping class.

In the Pump It Up class you will learn genius hacks to maximize and increase your milk production.

On the other hand, maybe you are returning to work and you are worried about pumping enough milk. In that case, definitely check out the Ultimate Back To Work Pumping class and make sure you are able to continue breastfeeding during the transition.

Whatever your pumping needs are, I guarantee these classes are worth taking and will help you maximize your pumping efficiency and milk production.

Hi, I’m Jeanne, thank you so much for visiting my blog. I am a working mom to twin girls and their little brother. In my free time I enjoy writing tips from my own experiences on pregnancy, babies, toddlers, and twins. Read More…