Breastfeeding Premature Twins – How To Prepare 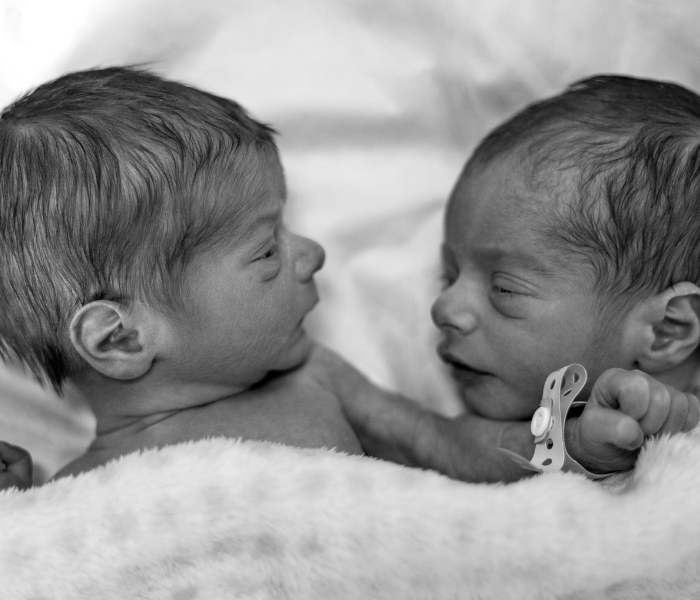 Breastfeeding one baby is A LOT of work! So imagine trying to breastfeed premature twins. It is quite the endeavor.

There are a lot of extra factors to overcome when breastfeeding premature twins, especially if you want to exclusively breastfeed them.

Besides the issue of having two newborns to feed, twins are typically born earlier than singletons.

On top of that, the recovery time for the mother after a twin birth is longer.

I am going to share my experience with postpartum recovery, pumping, and the NICU with twins. I think this will give you an idea of what to expect if your babies are born prematurely.

Additionally, this post will provide tips and things I learned, so you can prepare yourself to successfully breastfeed your premature babies, if you find yourself in that situation.

My twin girls were born 35.5 weeks into my pregnancy.  Luckily both babies were healthy, but they needed to spend some time in the NICU.

Twin A spent two days in the NICU, but she graduated and was even able to come home with us the day I was released from the hospital.

On the other hand twin B had to stay in the NICU, for what ended up being 1 week total.

It all worked out in the end and I am so thankful to now have two happy, healthy 3-year-olds.

When you are pregnant with twins, you should be prepared for the potential of a NICU stay.

Additionally, as happened in my case, there is the possibility that one twin comes home and one still needs to stay at the hospital longer.

I spent the first week of my twins life with spinal headaches. This was a complication from the epidural I received during their birth.

For me, a spinal headache meant I would have a pounding headache unless I was lying flat on my back.

Unfortunately, this was a less than ideal situation for trying to establish my milk supply. Besides feeding the babies, we were doing trips to the hospital and taking care of a newborn at home.

It was just very difficult to do all these things when you can’t even think straight every time you sit or stand up.

Since the twins were born early and taken to the NICU, they were immediately given bottles of formula when arriving there.

This was fine, they needed to eat, and I was in no condition to breastfeed or pump. Plus, at 35 weeks, latching would be difficult for them anyway.

I want to mention that I was told by our pediatrician and a lactation consultant that since my twins were born early, it would take until they were the equivalent of 42 weeks before they would be efficient at nursing.

With this information, I decided I would pump as much as possible. Then, I would see if they would latch around 8 weeks old.

I bring up my situation with spinal headaches because it’s important to recognize that you might not be able to just pop up after delivery, especially after a twin delivery and start working on breastfeeding.

You can’t know everything that might happen during delivery, but the best thing to do is recognize you will need to give yourself time for your body to recover.

The period right after getting home from the hospital is a great time to enlist as much help as possible from family and friends, since your physical capabilities will not be anywhere near 100% yet.

Within 24 hours of the birth of the twins, I started pumping while still at the hospital.

Luckily, my milk came in within a few days and I was able to pump a decent amount of breast milk.

Of course, I also needed to split this between 2 babies, so it didn’t always seem like that much. But with them being so small still, any breast milk was better than none.

The first month of the twins life I had help from my wonderful family members. After this, I was alone with them all day.

The reality of the situation was I did not have enough time to pump more than six times per day.

With a tough recovery and the exhaustion of taking care of newborn twins, I decided not to wake up at night to pump.

I think even my lactation consultant could see my desperation for sleep and told me to sleep and not pump. She thought not sleeping would create more stress, which would affect my supply anyway.

After this point, I was still pumping the same amount of breast milk, but their milk intake increased. This meant the breast milk in their diet decreased to about 25-30%.

Looking back now, I worked so hard to pump and bottle feed my babies. I did the best I could and I know that know.

But, at the time, I felt guilty and I felt like I was failing at breastfeeding.

As I mentioned previously I found time to pump 6 times per day. I also did not pump during the night.

In order to have long term success with breastfeeding or pumping you will need to pump at least 8 times per day. Finding the time to do this will be difficult.

So, my next piece of advice is to line up as much help as possible.

One of my mistakes when my twins were newborns was not allowing more help with baby care.

I knew after the first month I would be caring for the twins alone, so I was very focused on preparing to be alone.

One thing I could have done differently is hiring help. This would have allowed me to pump more often and, as will be discussed below, I could have had the time needed to focus on nursing and latching.

It didn’t really occur to me at the time to hire help. Plus, I spending that kind of money wasn’t ideal because I was on leave from work for 16 weeks, but 8 of those weeks were unpaid.

To summarize, two things that will help with long term success for breastfeeding premature twins are pumping at least 8 times per day and lining up as much help as possible during the first 2-3 months.

Feeding Both Breast Milk And Formula

Feeding a mixture of breast milk and formula from a bottle is complicated.

The lactation consultant advised us to feed breast milk first so none of it goes to waste.

This means that mid-feed there would be a break to make the switch to formula.

This can be tough with one baby, but when you have two eating at the same time (and one eats faster than the other), it can get pretty tricky.

I just wanted to point out this unforeseen issue that comes with pumping for twins. Since it would not be uncommon to need to supplement with formula.

One thing that will be necessary if you are nursing or alone watching your newborn twins will be mastering how to feed them at the same time.

I am not saying you will always feed your twins simultaneously. But, in the first 6-12 weeks it will be difficult to establish a schedule.

For nursing you will want to get a tandem nursing pillow. There are two options, the Twin Z pillow and the My Brest Friend Twins Pillow that are the best.

From what I’ve seen from my twin mom’s Facebook group, it really is each individual’s preference for what works best for them.

Lastly, as far as nursing goes, since you will also feed your twins by themselves sometimes you will need a single nursing pillow too.

As far as bottle feeding, this is where the Twin Z pillow has an advantage. You can prop your babies in this pillow and bottle feed them simultaneously!

There are other options too. If you have two bouncy chairs you can put each baby in there and bottle feed them.

In the end you will find what works for you. It could end up being something totally different than what’s suggested here.

When I would bottle feed my twins simultaneously, I sat on the couch and laid twin B in my lap and twin A to my side.

Twin B (who had stayed a week in the NICU) had trouble with formula leaking out of her mouth.

This setup allowed me to feed her and clean her up if I needed to, while continuing to bottle feed twin A.

Around 8-9 weeks of age, one of the girls started latching! I thought this would be the start of an easier breastfeeding path.

But, unfortunately, it did not work out that way.

What I hadn’t anticipated was that twin A did not want to latch. She just did not have the patience for this.

Instead of breastfeeding my twins getting easier, it ended up getting harder.

The time to feed twin B when she was latched doubled, since she was learning a new way to eat. I just had not anticipated this would happen.

After 8 weeks, I had mastered feeding the twins a bottle at the same time and now it felt like I was starting all over.

I would have to figure out how to nurse one, while I feed the other one a bottle. This seemed extremely tricky.

The other option would be if I got both babies to latch. If this happened it, I felt like I would be starting all over again learning how to nurse them simultaneously.

Figuring out how to nurse a baby is definitely a process. It takes a few weeks or longer to get the hang of it.

The idea of switching to nursing was stressing me out a lot and I already had enough stress as a new mom to newborn twins.

When the twins were 11 weeks old I decided to stop breastfeeding.

Nursing took such a long time and the amount of breast milk in their diet was decreasing. Plus, I was very efficient at feeding them a bottle at the same time.

It was an emotional decision, but at the same time I also felt like I had been set free.

I was now able to spend more time enjoying my babies and it was the right decision for me.

Before signing off, I thought it would be helpful to summarize the key points for successfully breastfeeding premature twins.

By enlisting the three strategies above you will give yourself the best shot at being able to breastfeed your premature twins.

I hope this post helped give you an idea of the struggles you might face when feeding premature babies.

From my experiences, I also want to say that as far as breastfeeding premature twins goes, it is NOT easier to have twins first!

As a first time mother, you do not have previous breastfeeding experience to rely on, which is so valuable.

Finally, good luck in your journey feeding your twins, however it pans out, I’m sure you will be the best twin mama to your newborn babies.

Hi, I’m Jeanne, thank you so much for visiting my blog. I am a working mom to twin girls and their little brother. In my free time I enjoy writing tips from my own experiences on pregnancy, babies, toddlers, and twins. Read More…